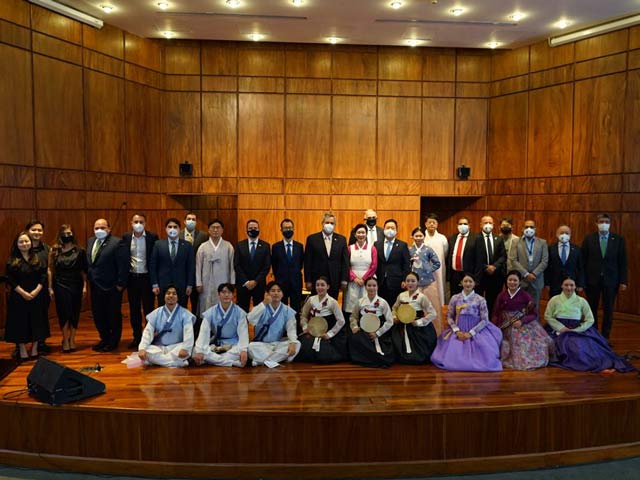 Tegucigalpa, September 2, 2021. – Within the framework of the LXI Ordinary Meeting of the Board of Governors of the Central American Bank for Economic…

Tegucigalpa, September 2, 2021. – Within the framework of the LXI Ordinary Meeting of the Board of Governors of the Central American Bank for Economic Integration (CABEI), and as part of the South Korea-CABEI Cultural Exchange, an artistic recital alluding to the traditions of South Korean culture was held on Thursday.

The activity, which offered a repertoire of ancient and traditional melodies of the cultural richness of the Republic of South Korea through its musical instruments, was in charge of the Korean media art group VisualKei, which captivated the participants and special guests with the presentation "The Silk Road, a warm echo to the world".

There was also a tasting of traditional dishes from the Republic of Korea, which was meticulously prepared by Grand Master Chef Lee Ha Yeon and Chef Myoung Hyun Ji, who enjoy international recognition and collaborate closely with the Korean Food Promotion Institute and the World Kimchi Institute, respectively.

"Korea is our most recent extra-regional partner and we are pleased with the cultural exchange that can be carried out with Central America through CABEI, and what better way to begin our LXI Board of Governors by uniting our ties of friendship with this country through artistic expressions as fascinating as this one," said CABEI Executive President, Dr. Dante Mossi.

The organization of this event, which is part of the Korea-CABEI Single Donor Trust Fund (KTF) under the Technical Cooperation under the name "South Korea-CABEI Cultural Exchange," was led by the Bank's Executive Presidency and the office of the Director of the Republic of Korea, Mr. Dongjoon Kim.

The traditional costumes and the magnificent performance of the musical pieces delighted the audience, who at the end of the presentation enjoyed the exquisite sample of Korean gastronomy.